If you’ve ever considered having a custom home built, you won’t find a more dedicated, hardworking, and trustworthy general contractor than Brian Riker. His reputation within the industry is unmatched.

Brian Riker has been around the building industry his entire life. The son of a carpenter, Brian’s father moved the family south, from New Jersey to Georgia, for the moderate climate and longer building season. Brian spent more than a few summers during his high school and college years helping his father and learning the building trade from the ground up. After graduating from the University of Georgia with a business degree, Brian went to work in sales and marketing for Kawneer, one of the world’s leading building products companies. Nine years later he accepted a position with Guardian, another industry leader in windows and window systems. For fifteen years he worked closely with architects and specifiers on projects of every conceivable scale from a few hundred thousand to multi-million office complexes. The exposure paid valuable dividends, yet deep down, at the end of the day, Brian needed something more. “I needed to feel like I was creating something that I was proud of, something that lasts and has meaning for people.” 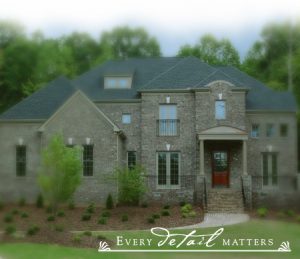 In 1999, while still maintaining a full-time job with Guardian, Brian began laying the groundwork for his own new home construction company by building his first home. “I was only going to do it if I could build the kind of homes I wanted to build.” In other words, his business model was not about quantity, but quality. “I love the design part of building new homes,” Brian said, “beginning with the site work. Of looking at a piece of property and envisioning how it should be to give the future homeowners the ideal environment for living.”

That first house sold quickly, and by 2000, Brian had resigned from his job and devoted himself full-time to new home building in Greensboro, NC. He hasn’t looked back. “We’ve been blessed. The business has done very well.” With almost 20 years experience as a homebuilder, Brian has stuck to his vow not to deviate from quality in favor of quantity. He is averaging about five homes a year, “and will never do more than I can do well and still balance my family and business,” he said.

Call (336) 669-7642 today to set up a consultation so that your dream home can be one of the Brian Riker originals built this year.